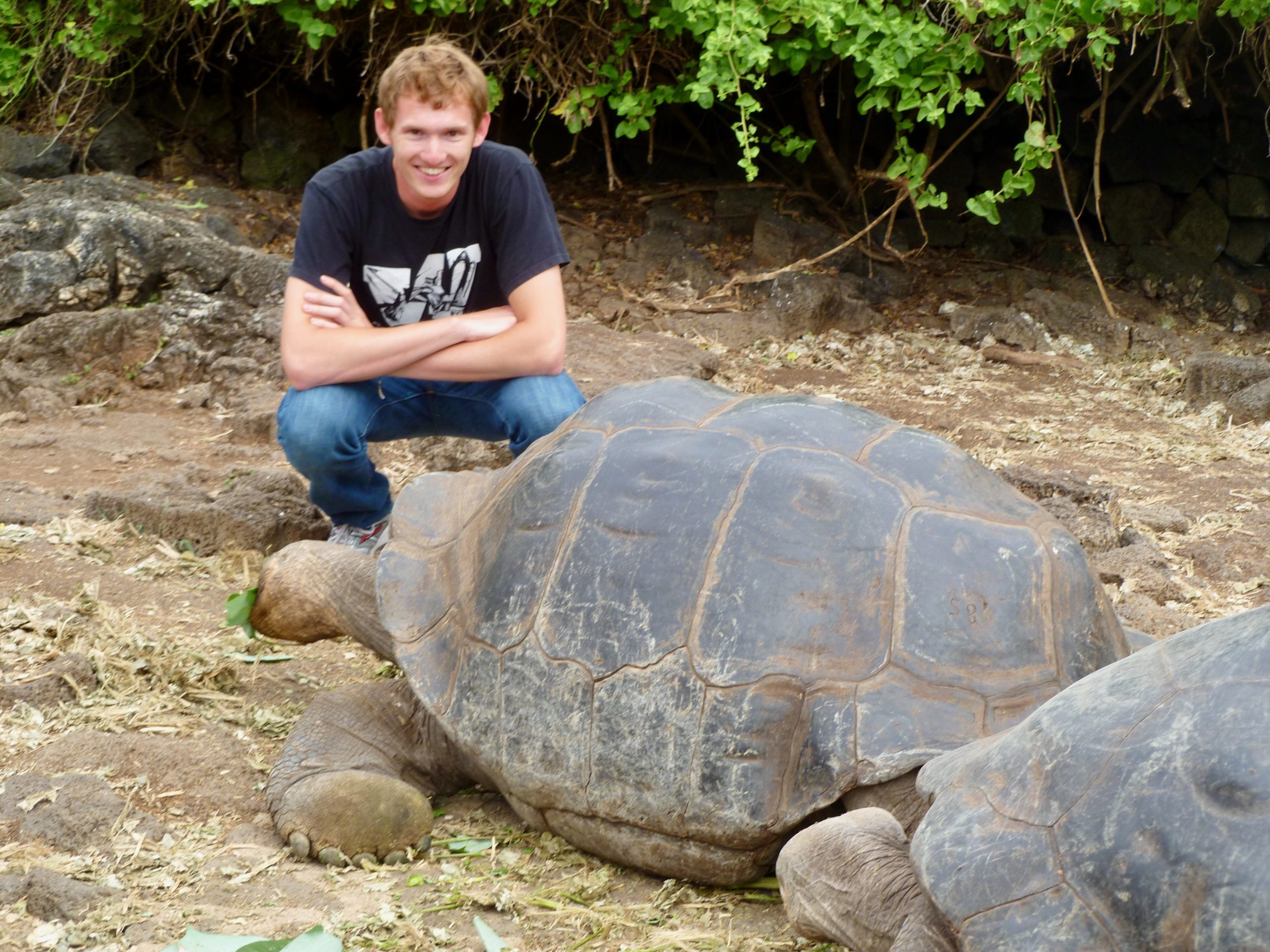 The morning of Friday the 29th was sooty and hot on the freeways of Guayaquil as I hitched a ride to the airport with my couchsurfing host Emilio. I was halfway finished with Vonnegut’s unknown, hackneyed book “Galapagos” and was on my way to visit its namesake. Winging away from crowded lowlands of coastal Ecuador on a TAME (pronounced tah-MAY) A320, the next stop was San Cristobal Island. The tone of conservation and eco-preservation was set early when the flight attendants walked the aisle spraying the overhead bins with aerosols, presumably for bacteria extermination. Touchdown, wait in line, pay a ridiculous tourist fee, and board the M/V Santa Cruz for a crash course in Darwinian naturalism.

The Galapagos Islands are strikingly barren. While the vegetation changes from island to island, the young volcanic archipelago is dominated for the most part by dry grasses, low shrubs, leafless trees, and cacti. This apparent desolation made the Islands fairly worthless to humans for hundreds of years, until Darwin decided to point out that the ecosystem makes a handy epicenter for modern biology (my naturalist John called him “Chucky D”). National park regulations prohibit most free exploration of the islands – the Santa Cruz needed specific permission to anchor at each location and send people ashore. I was in one of the English-speaking groups, the Boobies. There’s no end to the jokes about being a Booby – quite a privilege to be given the name. While I could write at length about the animals we encountered and our exact itinerary, I’ll let the photos do the talking. Feel free to ask if anything is particularly intriguing.

The ship itself was like Cinderella before the ball – pretty on the inside. She looks like some sort of rustbucket backwater fishing trawler from a distance, but aboard it was dark wood and china. My cabinmate Lulu was another solo traveller enjoying the sights of South America, and as a native of Mexico City she was able to help me practice my Spanish. Meals were multi-course gourmet affairs with lots of silverware. The trip was rough on the budget, but I haven’t seen such service in a long time. The islands neatly straddle the equator, so we crossed back and forth between hemispheres several times (“Try to feel the bump as we cross over” said the crew). Late at night on the open water, the Milky Way stretched from one horizon directly overhead to the other. It felt like we were floating in a galaxy or something, who would have thought.

Another unexpected highlight of the trip was the nightly trip up to the bridge with my dinnertime friends. The captain, a retired submarine commander for the Ecuadorian Navy, gave tutorials in marine navigation and radar technology (pretty complicated stuff when presented in Spanish). He was really interested in space technology as well, so we hit it off fairly well. He was a real professional and had what seems to me a dream-job for the nautically inclined.

Over the period of four days, I swam with Sea Turtles, almost stepped on more iguanas than I can count, snorkeled with stingrays, watched sea lion swimming lessons, witnessed Albatross mating rituals, and saw the famously diverse finches. The complete fearlessness with which the animals regard humans is really breathtaking, making this one of the most unique places I will likely ever visit. I returned to Guayaquil on a Monday, and not knowing what to do next, decided to get on a bus to Peru – stay tuned!