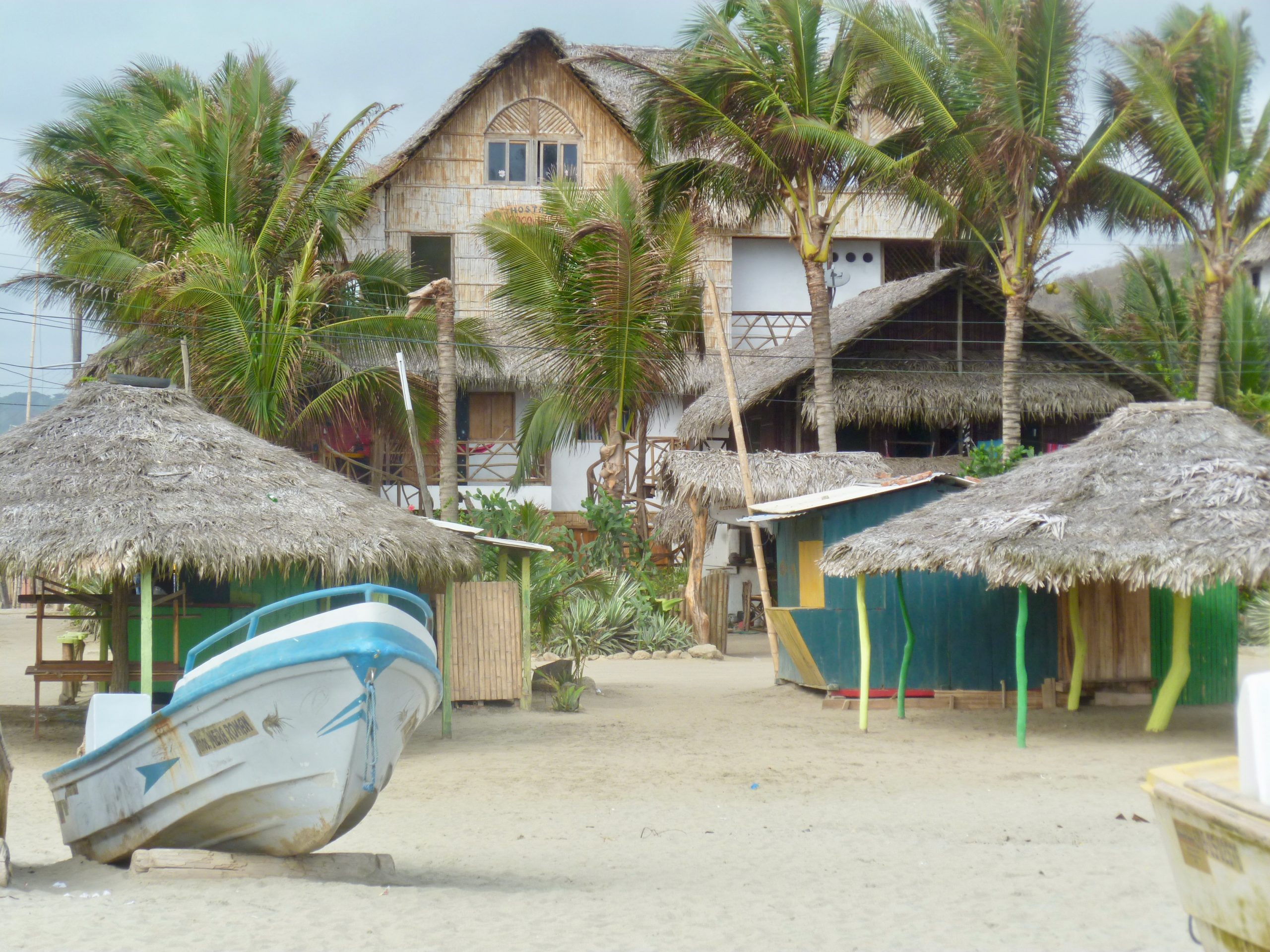 Whale watching on the coast of Ecuador is a lot of fun. Sure, the Humpbacks are really neat. More entertaining is the competition between the eight or ten boats out there at any given time. Each crew strains to see the next surfacing giant, and at the first sign of blowhole spray, it’s full-steam-ahead right at it. Who cares whether the whale is scared stiff and dives out of the way – all that matters is that we are the first boat on the scene. Everyone high-fives and takes photos while the other boats swarm around like kids around a soccer ball at Skyhawks.

The real traveling phase of the trip started last week as I wrapped up my first chapter in Quito. Forty hours of Spanish lessons got me off on the right foot, but it was time for mamma bird to nudge the chick out of the nest. Before leaving Quito I was able to climb high above the city on a Swiss-built gondola, straddle the equator at the Middle of the World (Mitad del Mundo), and snoop around the city’s airport a little bit. Did you really expect me to skip the airport?

Last Saturday I took a night bus from Quito to San Vicente on the Pacific coast. You won’t find San Vicente in any travel brochures. The bus dumped me off in the wee hours of the morning, and I learned pretty quickly that small Ecuadorian towns are creepy at night (almost tripped over a four-foot snake when I got off the bus). After a Jesus-adorned taxi ride with a babbling, mumbling fisherman-type driver to the sleepy beach town of Canoa, I finally caught some sleep. The road along the coast smells at times like shrimp farms and rotting fish ñ if you like seafood, this is the place for you. Canoa has no ATM, a different store for each dinner ingredient, and a pace of life that harkens to a dust-bowl shanty town. There are more hammocks than people, more dogs than hammocks, and more mosquitos than everything else in the town combined. The people at Hostal Coco Loco were amazing and the respite from city life much appreciated.

On Wednesday night I made my way, by bus, to the seaside town of Puerto Lopez several hours to the south. This town is famous for whales, teaming masses of Humpbacks at the height of mating season floating around singing to each other or whatever whales do. This brings us back to the beginning of the post ñ the swarming motorboats gunning each other down for that elusive whaleboat gold.

I write this on Thursday night, the eve of my Galapagos expedition, from the sweaty port city of Guayaquil. I find myself in the largest city in Ecuador, with over 4 million residents (over 7 times larger than Seattle). This is also my first experience in Couch Surfing, and a HUGE thanks is in order for Patricio and Emilio for showing me around the city and welcoming me to their home. Signing off gracefully, like a Humpback descending out of sight below the glinting waves!

Salsa lesson at the Simon Bolivar School
Cecilia, my Spanish teacher, lays down the law at the Simon Bolivar School
Cooking Lesson: Ceviche with Tuna – Amazing!
Evan threatening to put in way too much pepper
Teleferiqo base station in Quito
The Teleferiqo – a gondola system up to the top of Pichincha, above Quito
View from the Teleferiqo as it climbs over 3,000 feet above the city
Quito is a huge city – this is about 2/3 of it
At the top of the Teleferico ride, stll nowhere near the summit of the volcano
Pichincha
My Teleferiqo buddy Peter, a civil engineering student from New Hampshireh
Part 4 – 12 of 62
Now you know where to go for the fresh stuff
Part 4 – 14 of 62
Part 4 – 15 of 62
One must always find a good place to watch airplanes
Part 4 – 17 of 62
Party bus! Hold on tight!
A disco on wheels
Part 4 – 20 of 62
My first bus trip – night ride from Quito to San Vicente
And this is where they dropped me off – at 3:30am. Yeah, that looks safe.
Side street in Canoa
The beach at Canoa
Part 4 – 25 of 62
Canoa friend Tom helps some local folks onto the passenger ferry to Bahia
Not a bad way to travel
Epic boat photo
Part 4 – 29 of 62
Double lap cats.
Part 4 – 31 of 62
Not a bad scene in Canoa, Ecuador
Part 4 – 33 of 62
Life is tough on the Bonderman
Sunset, huzzah!
Part 4 – 36 of 62
Hostal Coco Loco in Canoa, awesome beach town
Fruit truck
Perverse Che
Local fisherman mending the nets
Another raggedy-andy boat
Greased lightning at the birthday party for Simon Bolivar School
Some cool cats
Part 4 – 44 of 62
Part 4 – 45 of 62
Part 4 – 46 of 62
Part 4 – 47 of 62
Almost back in the Northern Hemisphere
Straddling the equator
Part 4 – 50 of 62
Dolphins
Just give them a harpoon and this would be a scene out of Moby Dick
Part 4 – 53 of 62
Part 4 – 54 of 62
Part 4 – 55 of 62
Part 4 – 56 of 62
Part 4 – 57 of 62
Part 4 – 58 of 62
A tiny part of the fishing fleet in Puerto Lopez
Main street in Puerto Lopez (although not the main tourist street)
Moto-taxis are the main method of transportation in Puerto Lopez
This is what the cow looks like in action – kinda scary haha
Tags:Ecuadortravel