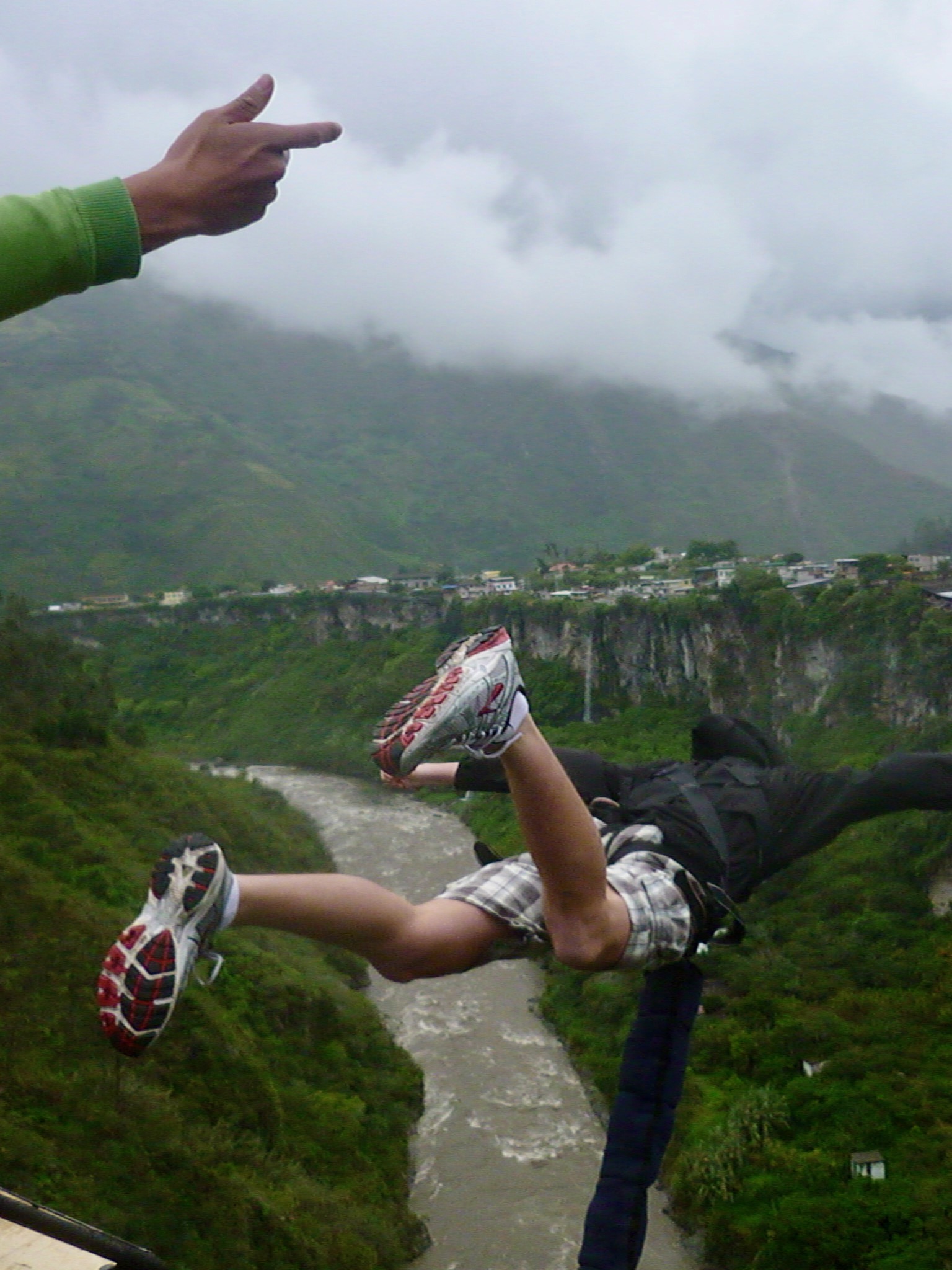 Out and About in Ecuador

Uno, Dos, Tres: donít think, just jump. The view from 100 meters above a churning, muddy river is much scarier when you are standing on a wooden plank slung over the railing of an Ecuadorian bridge. Thatís 328 feet, and harkening back to the days of physics, it would take a full 4.5 seconds to reach the water (in a vacuum ñ but hey, BaÒos has the thin air of high altitude). Thankfully there is a rope that will make this descent much easier to walk away from. The stony gray sky, cold drops of rain, and honks from speeding trucks just behind on the bridge make the scene unique. And the bottom drops out! (This wasn’t bungee jumping, but “Swing Jumping” – check the video at the end if you want)

Last weekend, I went on an adventure with some Spanish School friends to try our hand at some outdoorsy adventure. Besides jumping off bridges, we repelled down waterfalls in the thick, dripping jungle; zip-lined across canyons on cables two-thirds of a mile long; crawled through muddy stone tunnels behind a monster waterfall to a lookout underneath the rumbling, ferocious spillover point at the top; and rode rusty bicycles through a downpour along the side of the road, blasted by the grit of passing pickups and buses. I have now ridden through dark smoggy tunnels in the back of a pickup truck, eaten a Guinea Pig, and cajoled a toilet to flush using an ingenious water transfer system from the shower to the rear tank. It will be a long time before I forget the weekend in BaÒos ñ the people there, the lush greenery, and the overpowering saturating wetness.

This post will serve as a catch-up for the last week and a half. If you are frustrated by the lack of frequency, I suggest the New York Times or CNN. Anyway, after returning to Quito, it was time for another week of EspaÒol lessons and city exploration. I sat through one terrible night in a seedy, overpriced, smelly, sketchy hotel before moving to a new home for the week: The Grinn House. As far as I can tell, this is merely a misspelling of ìgreenhouseî. It was a heavily-Latin hostel ñ my buddy Erasmo (aka ìCubaî) at the front desk didnít speak any English but loved giving me Spanish lessons (including conjugation charts) at a speech rate approaching Mach 1. Mariana, the amazing older lady who took care of the place by day, didnít speak English either. Speaking of which, neither did ColombiaÖ nor that other guy from MexicoÖ nor the Peruvian. What a great chance to practice Spanish!

This Saturday was a day-trip up to the Otavalo market. We stopped along the way, sampling indigenous fruits and cheeses. There are more volcanoes in Ecuador than any geologist could even dream up, making for some spectacular views in this Sierra region of the country. The world-famous animal market is interesting, smelly, and not for the faint of heart – something about that sound of screaming pigs. Dogs were $5, cats $1 – it’s official, dogs are better. At the actual market, I purchased a sexy, sleak, and chic alpaca sweater with little white critters and snowflakes (or volcanic ash, given the location) embroidered on it. The biggest challenge of the day was trying to bargain the price to $13, but forgetting how to say both 13 and 14 in Spanish. I went with $15 instead. Learn your numbers, boys and girls. I fell in love with the town of Cotacachi, didnít care too much for Otavalo, and learned that they have ìmilkî flavored ice cream, not vanilla.

As of yesterday, I have another new home, Hostel Hauki. I can’t say much about it yet. My Salsa skills are gradually improving, Cecilia has given up altogether trying to give me Spanish homework, and that’s all for now. God speed to everyone!