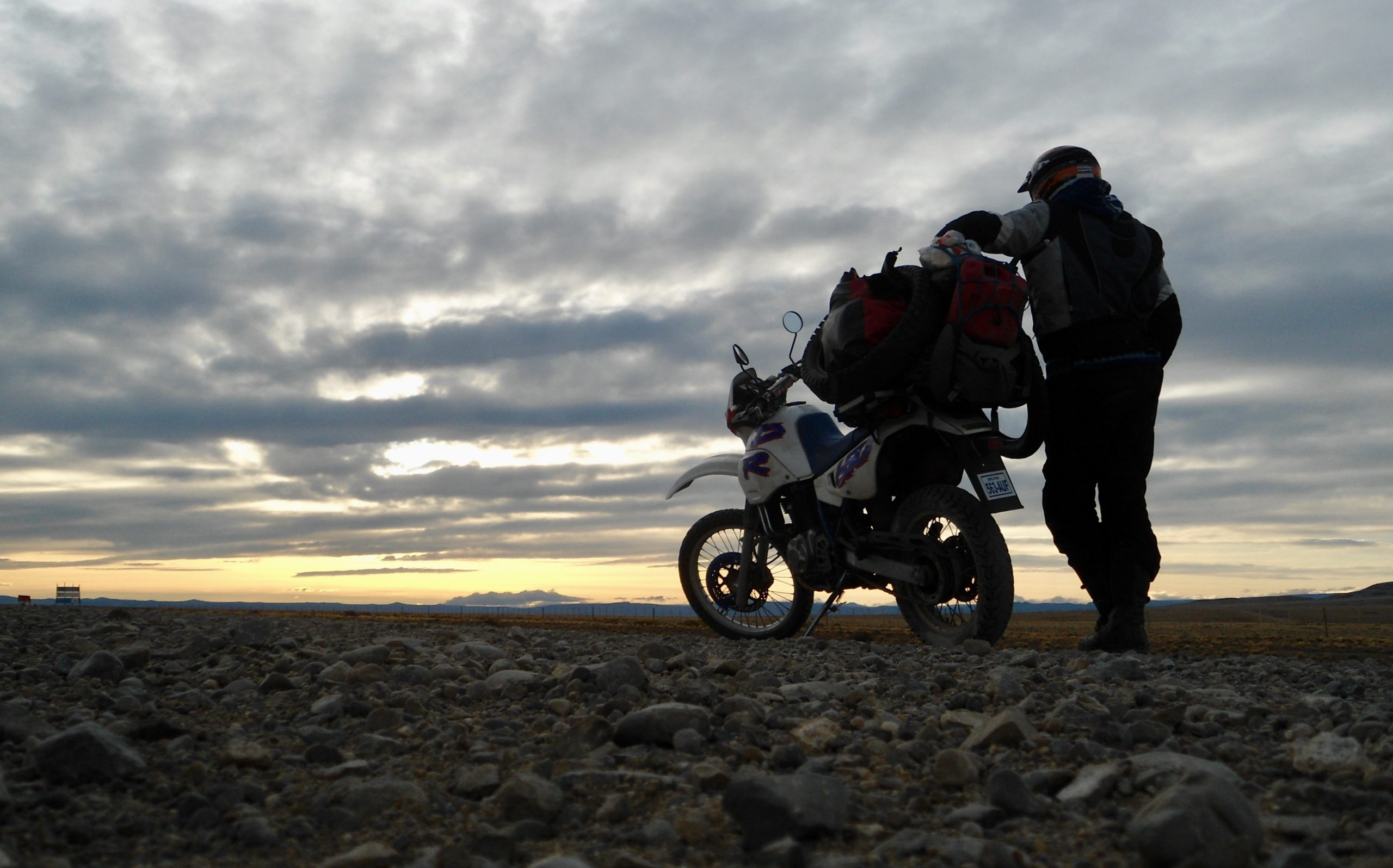 Ripio – the word means gravel in Spanish. It sounds a bit sinister, the kind of word that the sorting hat would send to Slytherin. After a couple of weeks crawling south on Ruta 40 in the windswept depths of Patagonia, I started to think the word is a heck of a lot more appropriate than “gravel road”. I set out at the beginning of February on a limping motorcycle, destination Tierra del Fuego at the southern tip of the populated world some 2,200 miles away. My bike, heavily loaded on the rear luggage rack at a high center of gravity, rides with something less than stable grace. Add strong gusts and slick piles of loose rock scattered throughout the road, and there’s plenty of incentive to stay focused. It’s like riding on a bad driveway for hundreds and hundreds of miles. At times it’s miserable – but then I see another sunset unfolding on the distant horizon, and try to grasp the reality of this extraordinary time and place on the adventure of a lifetime. This stage of my Bonderman has been more trying, outlandish, and solitary than I could possible convey in this space – it’s hard to believe it even happened.

Life on the road with the motorcycle is rough around the edges. I try to get rolling around 9am each morning. First I check the oil, usually pouring a few more ounces into the increasingly-thirsty motor. After loading the rear luggage rack with a small mountain of bags, tires, clothing, and tools, I turn the key and kick at the starter until I start sweating and/or the engine starts. As the oil gets circulating, the coughing and sputtering gives way to the same tired old putter. There’s barely room for my butt on the seat with all the stuff strapped behind me, so I sit with my back straight and my entire upper body in the wind. Then, with the throttle held open around 4,500rpm for hours on end, I travel. There are almost no cars on the road, so it feels like another dimension as I bump from one gas station to the next. The best clock is the sun, arcing through the northern sky from east to west. As the sun dips toward the horizon, I find a place to pitch the tent for the night. Unloading the luggage into the tent, I make a sandwich and eat some apples for dinner. The further south I travel, the colder the nights became, until I am sleeping in my full gear. Did you know that you can wear a motorcycle helmet as a head-warming pillow?

One of the fun things about traveling Ruta 40 is the people you meet doing the same thing. It is one of the best-known motorcycle destinations worldwide, so there are plenty of people along the route working their way down toward Ushuaia. I met up with a couple of different groups, sometimes for an hour or so and sometimes for over a day. The motorcycle journey is an obvious shared experience, so it’s pretty easy to strike up a conversation (except when they speak only Portuguese, in which case the conversation is still difficult). After an afternoon on the gravel, passing another rider in the other direction is always marked at the least by waves and honks. Usually both riders stop to say hola and swap stories.

I’m pretty much skipping over the actual destinations here – the pictures can help tell that story. I met up with my Mendoza friend Julian again, staying with him and his grandma in the small skiing town of Esquel. The famous lake district city of Bariloche was a beautiful spot to unwind for a day. El Chalten lived up to its title as Argentina’s trekking capital, with a huge variety of hikes into classic Patagonian glaciers and mountain meadows. The Perito Moreno Glacier in El Calafate was a spectacular display of deep-blue ice constantly calving monster chunks off its face into the water below. Rio Turbio, even though I was just passing through, was a thoroughly dank and depressing coal mining town on the southern border with Chile. Rio Mayo had two hotels in town, and I got to help out with the business espionage between the two (“How much are they charging? What’s included?”) And so on.

The motorcycle has been both liberating and restrictive. When everything is going smoothly, it’s incredible to fire up the engine and go anywhere on the map. However, I keep getting stuck with insidious mechanical problems, with mounting costs and declining value at each shop I visit. Dealing with mechanical problems in a foreign country is an arduous, frustrating process having nothing to do with “travel” in the normal sense. I spend days on end in the parts of town with auto shops and bus stations (you can imagine) waiting for some part or other. At times it feels like a bad marriage, but in the end will probably add layers to this experience that I can’t appreciate yet.

Ushuaia! Rolling into the city, after so many miles and headaches on the way, was magnificent. I wandered the city with new friends, took in the view, and tried to wrap my head around the fact that I made it to the southernmost city in the world. Perhaps the highlight was renting an airplane, the little T-tailed Piper PA-38 Tomahawk, to putter around and do some sightseeing. It felt amazing to be back at the controls of an airplane after 7 months, and I liked the little penguin painted on the cowling of the airplane.

Now the adventure continues northward. One way or another, I am angling toward Sao Paolo by March 15th. As the crow flies, that’s 2,280 miles – so far I’ve logged 7,750 miles on the odometer since buying the Suzuki. If I was driving through the center of the earth, I’d have passed the core a few weeks ago!