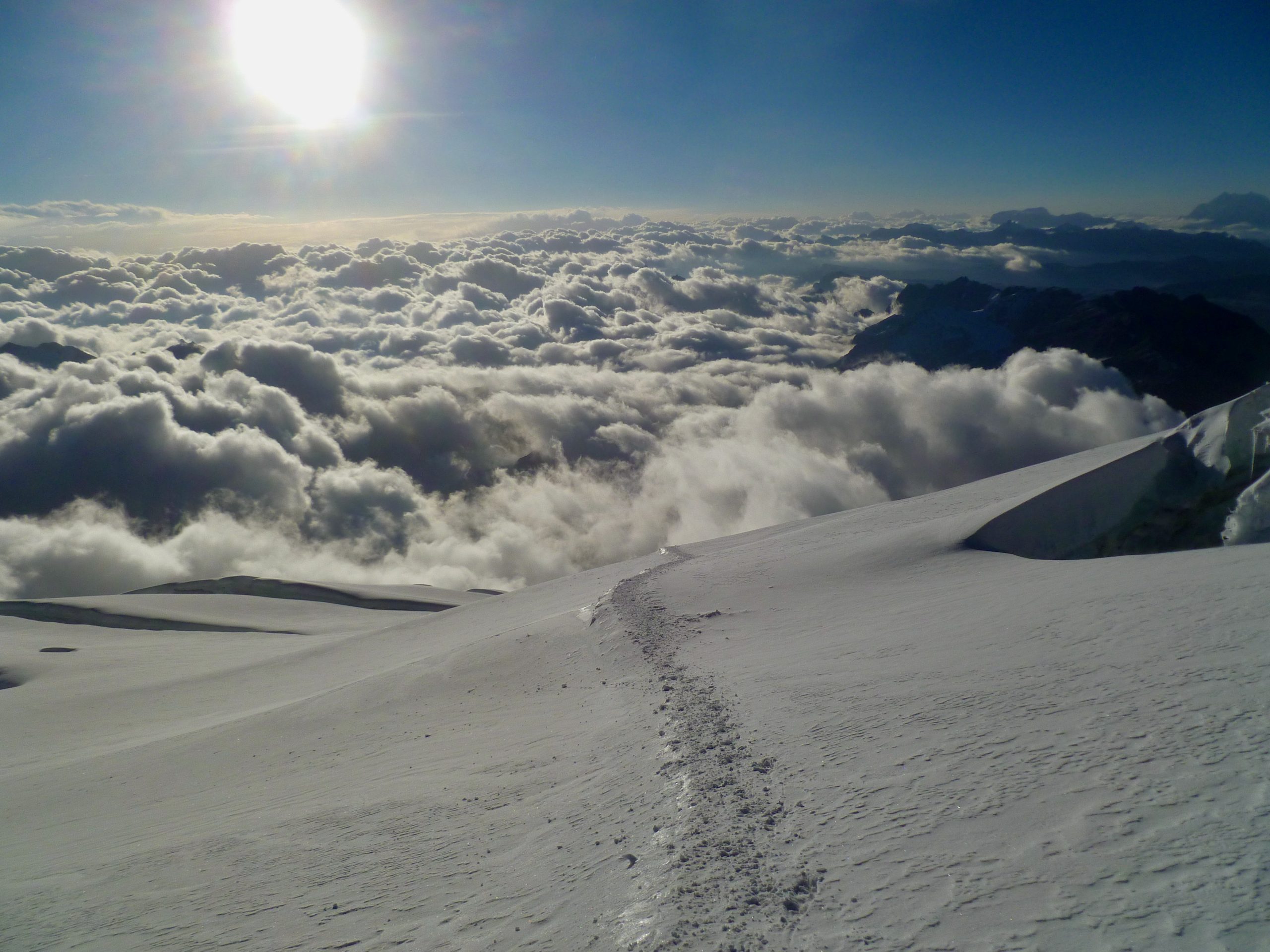 It’s five in the morning and the pre-dawn light is just enough to hint at the peaks below us. The air, well below freezing, bites at my face and nose. A long string of snot hangs like a jello waterfall from the left nostril, but I really don’t care anymore and it’s too dark for anyone else to see it. Still recovering from another round of stomach nastiness, with an aching belly and foggy head some 19,000 feet above sea level, I remind myself to put one foot in front of the other and keep moving upward. My headlamp makes a halo in the snow, with my umbilical rope stretching ahead to my climbing partner Manuel’s bright orange coat. One thousand feet to go – this is by far the highest I have ever climbed. Just keep walking… steep icy slope on either side of the sidewalk-width path, the final ridge before the top… what a feeling standing on the summit as the sun peaks over the jagged horizon! This is Hauyna Potosi, 19,975 feet of snowy Bolivian rock and my first adventure in mountaineering.

I took the GRE in La Paz, realizing that it might be a good idea to go to graduate school at some point in the murky future when I’m no longer climbing Andean mountains and crawling around in Bolivian mines. This was very much like taking a placement test in the United States, except that I was worried about a bottle rocket flying through the window while I tried to think of a definition for “mercurial”. As it turns out, mercurial refers to a person who changes suddenly or unpredictably, much like Bolivian politicians swinging back and forth between rampant globalization and nationalizing socialism. As it happens, I was in La Paz during a major demonstration against a proposed highway running through a national forest inhabited primarily by indigenous people. For several mornings in a row, I was awakened by massive firecrackers, honking horns, burning tires, and chanting marchers in the street below my window. Let’s just call it “Occupy La Paz,” but with a bit more violence and urgency than the American equivalent. Political unrest is a worldwide phenomenon these days, but it was disconcerting to be so close to so many loud, unhappy voices. Two days before the GRE, the city was shut down by a city-wide strike and march. Thankfully things cleared up in time for me to evaluate the meaning of Mercurial in a small airless room near the local university.

After almost two weeks in La Paz, it was time to move on. I chose Cochabamba. How could a guy not visit a city with a name like that? The three big cities in Bolivia are La Paz, Cochabamba, and Santa Cruz. La Paz is high in the mountains, with temperamental (mercurial?) and cold weather combining with unpainted, grim buildings to create a frigid overall feel. Santa Cruz, on the other hand, is hot and humid in the lowland jungle. The people speak in heavily-accented slang, party the night away, and distance themselves from the mountain capital’s political current. Cochabamba lies halfway between in geography, climate, and politics. The weather is perfect, the people relaxed, and tourism minimal. Cochabamba was my destination to search for a motorcycle and practice my Spanish for a while.

My first CouchSurfing host was Miguel, a 23-year-old airline dispatcher for Lloyd Aero Boliviano and an aspiring airline pilot. This was a great match, and we were able to poke around behind-the-scenes at Cochabamba’s airport. Miguel and his brother Ariel also took me out to a town called Tiraque for a weekend festival celebration. We were invited into a special party at the provincial government building, eating food and drinking beer with the mayor and a pack of brightly-dressed traditional dancers. Throughout the weekend the hospitality was amazing – special thanks to the entire extended Soto family for rolling out the red carpet, no questions asked! I felt like part of the family.

Another good story: one night I was with Miguel and his sister at a local watering hole when the Immigration police busted in. My passport photocopy wasn’t good enough for them, so I was piled into a police pickup with a few other tourists and hauled downtown with sirens blaring. It was all a good adventure, since there was clearly no crime involved – had a good conversation with the stone-faced officer sitting next to me, and even grabbed a photo with him! Miguel ran home and got my passport in the time it took the police to round up everyone they wanted to take, so at the immigration office it was a quick process to be turned back out onto the street like a criminal released from jail. Boy does it feel good to be a free man!

I have been out of the country now for 104 days. Like the first hundred days of a new American presidency, it’s a dynamic and defining time. Much has happened in those hundred days, and I’m already a different person than when I left. My family is 5,650 miles away – hi mom, I miss you! My concept of the human family, that we are all fundamentally the same, has transitioned from an abstract concept that I pretended to understand to a firm conviction. I have slept under the Southern Cross on cloudless, starry nights. I have changed from a neophyte traveler to one of the old hands, the wrinkled sage at the hostel bar. My backpack is dirty and my clothes sometimes stink. I am more self-confident, weary of what I read, and trusting of what I see with my own eyes. Lifting off the runway in Miami over three months ago bound for Quito, I took a deep breath and thought: “Wow, I won’t be back here for a LONG time.” I had no idea.

And, on day 102, I bought the motorcycle that I promised would be the centerpiece of this trip 🙂