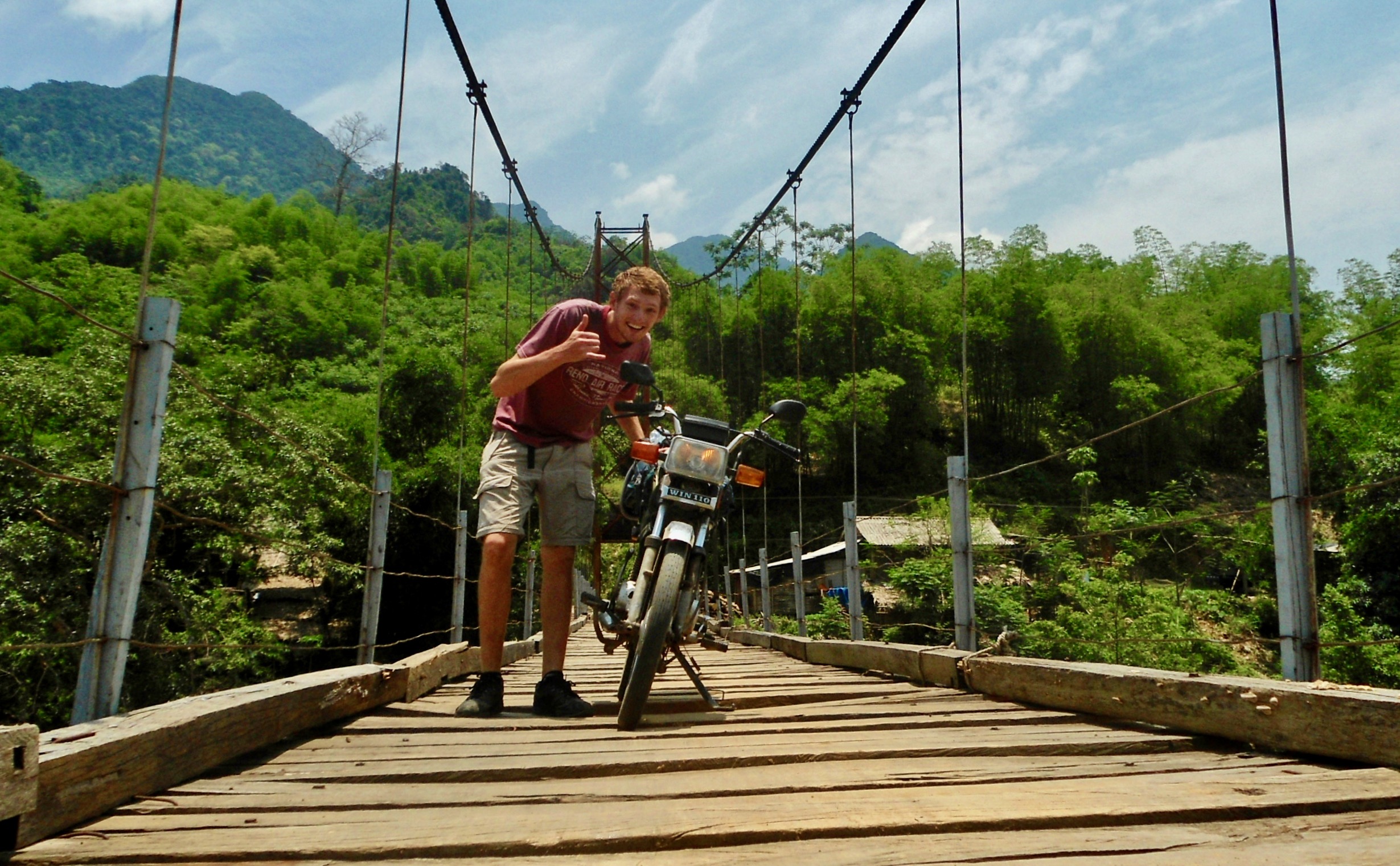 Motorcycling down the backroads of Vietnam across the DMZ, from north to south, the atmosphere is thick on many levels. It’s so hot and humid that sweat beads on my forearms, even with the highway breeze. The aura is overwhelmingly Vietnamese. Water buffalo trundling down the roadside embankment wander into the path of the bike without a care in the world – a water buffalo is worth about the same as a used motorcycle, incidentally. Women in conical hats toil in the rice fields. Men feed the harvested rice shoots into roaring roadside grain mills that toss scrap hay in a ragged arch right across the road, from one side to the other. It’s like a grass rainbow that you, as a biker, ride right under by necessity. Spent stubble fields are set ablaze, giving entire valleys a brown smudged lower layer of smoky air. Kids on the side of the road, sensing your whiteness from the second your figure becomes distinguishable, give a big smile, wave, and a belted “Hello!” in their best English. Then there’s the atmosphere of history riding with you, the realization that the town you just passed was flattened 40 years before by bombs from a B-52. So was the one before that. And the one coming next. Crossing uncultivated sections of this land on foot, even today you would run the risk of an unexploded ordinance accident. Crossing from north to south feels, in a strange way, like crossing from behind enemy lines back into friendly territory. This thought is, of course, absurd – the country has recovered almost completely from the American war, with the main remnants driven by tourism. The same flag (and the occasional hammer and sickle) flies over the entire country now, north and south. How different is my experience from the 23-year-old Americans here 45 years ago? Case in point: Most of the cross-country motorcycle route has taken me inland on what was once the Ho Chi Minh Trail. Imagine doing that a generation ago as a young American male.

There’s something about coming to Southeast Asia that makes it really difficult to stay up to date on blogging. The internet is available almost everywhere, and there’s time to work on it, but the heat outside just shuts off any motivation. Instead of going through where I’ve been chronologically, I’ll just jump right in to Vietnam and add some details about other stops, leaving most of it for your imagination.

Check out the motorcycle I got for $200 in Hanoi – 110 cubic centimeter of raw whining power and a flower painted on the tank:

Vietnam is a very loud, in-your-face country. It has a mixed reputation from travelers for a variety of reasons. The countryside is gorgeous, with everything from pearly beaches to dreamlike jungle rock formations. There is enough culture and history here to keep the bookworms busy and the foodies eating. Prices are cheap, everyone is an instant millionaire (1 million Vietnamese Dong is about US $50), and coffee is unique but delicious. Traffic is completely crazy, with essentially no traffic laws. Riding a motorcycle in the city is like being a blood cell in an artery. Crossing the street involves closing your eyes, putting a foot out into traffic, and walking at a slow steady pace hoping that the sea of scoot-scoots will swerve around you. Scary at first, but it actually works pretty well. Cars are rare here – everyone rides scooters, and everything is transported on them to boot. The first hog-tied live pig on the back seat was a surprise, but after a few it seems pretty normal. Also regarding traffic, the main north-south highway between Saigon and Hanoi is less than pleasant because of passing busses and trucks. No, honking and flashing your lights doesn’t make the road wider, my friend – not a relaxing experience.

Politically, Vietnam is a communist country. This is tough to believe when you look at the thriving business district of Ho Chi Minh City (formerly known as Saigon) or the obvious wealth disparity of the people. Amongst the bicycle rickshaws you notice the odd Porsche or Audi. Still, seeing the waving red flags and stiff government sector uniforms is an interesting contrast to say… Singapore.

I was in Singapore for six days before flying to Vietnam. Othmane, my friend from Morocco, told me to expect “a city from the year 2030.” It’s an accurate assessment. The tiny city-state, perched on an island at the southern tip of peninsular Malaysia, has its sights set on becoming the financial and trade capital of Asia. Development is rapid, with futuristic buildings popping up right and left like some sort of Martian landscape. The couchsurfing network was amazing in Singapore – I was able to stay with a local, the best cure for big-city blues, and meet a few other great new travel buddies. While the city is chalk-full of shopping malls and skyscrapers, my favorite feature was the downtown National Library. At a towering 16 stories of greenscaped glass and steel, it’s a structure worthy of attention. More importantly, its reference collection on technical material (at least aerospace) in English was top notch, and I’d imagine the Chinese and other sections were equally comprehensive. From what I’ve heard, Singapore’s #2 government expenditure is education (after defense).

Stretching back further into the past, I spent almost a month in Malaysia. I started in Penang, an island state in the northwest of the country most famous for its food. And what food it is! Malaysian culture is anchored in the intersection between Chinese, Indian, and traditional peninsular influences. This shows up in the food, politics, language, and street culture. There are some pretty hideously unfair policies in place regarding racial preference in education and the government sector. It’s been this way for three decades, but the discontent (especially among Chinese and Indian descendants, regardless of citizenship or birthplace) is pretty obvious if you dare to mention politics to any Malaysian. On an unrelated note, I finally had a chance to try the Durian, an iconic fruit that reminds me of a needy animal. It smells terrible, to the point where hotels and public transportation have signs forbidding firearms, eating, drinking, and durian! The part you eat is a creamy little pod of yellow goo that some people just can’t get enough of. It seemed fine to me – I tried one of the whimsically-named “D-14” species – but I won’t be shifting to a durian a day to keep the doctor away.

Then came some tea plantations in the Cameron Highlands where I had my scariest minivan ride of the entire trip. The driver had a bee in his undies or something because he was driving warp speed and I thought the van would shake itself apart. Thankfully we made it to the sleepy port town of Kuala Tembeling to catch a speedboat taxi to the Perhentian Islands, but arriving on a Friday afternoon, the entire Muslim village was running two hours late on account of prayer. There was nothing to do but sit down and wait. The Perhentians are a sort of diving paradise. Snorkeling at shark point, we saw sharks. In turtle bay, we swam with turtles. They name things well there. After getting a nasty sunburn, it was time for four days in the jungle – Mud! Leeches! Sleeping alone in a hut with primates hooting outside the glassless window, riverboats and villages, torrential rain, and sweaty clothes! The Taman Negara National Park is home to all sorts of beasts and vegetables (as Carl Sagan likes to put it), including tigers and jungle pigs – but they like to keep to themselves instead of attacking tourists. The foliage is so thick that you would never see them anyway.

Making my way out of the jungle covered with mud, the hurried trip back to civilization involved more boats and busses. Drifting in and out of sleep as the final bus roared west, I was enjoying the sunset light as we rounded a final mountain curve to see the Kuala Lumpur skyline ahead. The Petronas Towers, glistening in the reflected pink light, were truly magnificent. The luster of Kuala Lumpur’s central core never really wore off in the next week. With a variety of impressive architecture and interesting cultural mix, it’s a fantastic city for sightseeing. One downside is the dizzying highway network (making it very difficult to walk between some no-brainer tourist thoroughfares).

So there you have it – a whirlwind tour of my last 7 weeks on the road. Southeast Asia continues to impress with it’s variety of flavors – culture, food, language, race, religion, and more. With constant change, it can be difficult to adapt to each new place before jumping right into the next one. Returning to the United States in 5 weeks after all of this will be interesting.