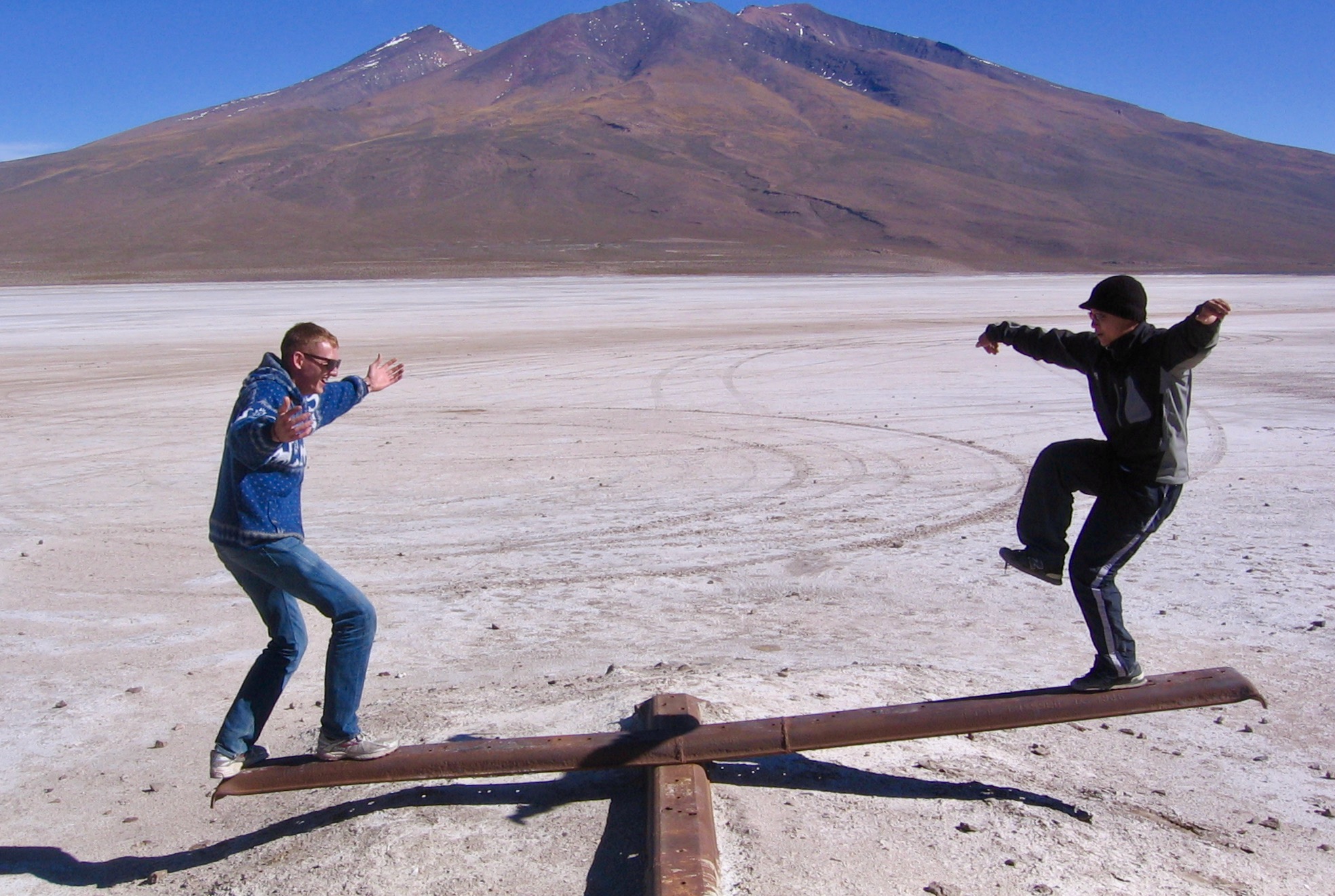 Do you want to be Keith Urban or George Clooney? That is the question. Getting a haircut ($2.85) in Sucre, Bolivia was an exercise is flipping through a picture book of celebrities, pointing to the sexiest one, and hoping that no butchery would ensue. Never fear, my hairdresser ended up being fantastic, even cleaning everything up with a straight-blade razor at the end. Strike one item off the day’s list – get haircut, drink juice, buy postcards, find post office, drink coffee, find dinner. Life is tough.

Proceeding in no particular order: Jacob and I found ourselves at the Salar de Uyuni on a three-day tour through the most stunningly surreal landscapes I’ve ever seen. Quickly becoming one of the hottest tourism destinations in the Andean circuit, the salt desert is criss-crossed by 40 or 50 4×4 vehicles each day. The salt desert itself is beautiful, with its hexagonal cell-shaped ridges, white featureless horizon highlighting the cloudless blue sky, and vastness of scale reminiscent of being in the middle of an ocean. Then there were the colored lagoons, tinted red and green by various types of bacteria, home to huge flocks of pink flamingos. The Dali Desert could be the backdrop to one of the namesake surrealist painter’s famed paintings, those big elephants would fit right in! We had a fun group and a multi-talented guide, Rodrigo, who drove and cooked and fed orange rinds to the Viscachas (little rodents) to make them come out for photos.

Now we’re going to jump to another new town, Potosi. This high-altitude city has subsisted on mining alone for 460 years. The hill outside of town, “Cerro Rico”, showers the inhabitants with silver and riches. For generations, the boys of the town have followed in the footsteps of their fathers and grandfathers and started to work in the mines when they turn 11 or 12. Like the big boys, these kids chew coca leaves, drink 96% alcohol in their time off (and sometimes in their time on), and eat big breakfasts of potatoes and llama meat. Jacob and I went on a mine tour with “The Real Deal Tours”, a company founded by guides who were all miners themselves in younger years. Efrain, the garrulous company founder told us light-heartedly about being taken advantage of for years by Koala Tours, the goliath in town, and how he decided to strike out on his own. The tour took us deep into Cerro Rico, through almost two miles of dusty hot tunnels over a period of two hours. It is a superstitious place, with shrines peppered through the tunnels to “Tio”, the Quechua spirit of the underworld. We talked with the miners, gave them handfuls of coca leaves and drinks that we bought at the market earlier, and cringed every time dynamite explosions shook the walls. These are cooperative mines, meaning that the miners purchase their own equipment, work as much as they want, and sell their own product at market. It’s an interesting concept, a crushingly difficult job, and an eye-opening sight to behold. The miners are, to a person, happy and jocular – they are proud of their work and make more money than the people who work in town. I’m not signing up any time soon, though.

I keep a detailed journal separately from this blog, with all the details and stories that aren’t fit for publication on the web. In a moment of forgetfulness, I left this journal sitting in the eating room at a hostel in San Juan on the outskirts of the salt desert, literally days from the nearest full-sized city. While I’ll spare the full week-long story of getting it back, which relied mostly on the assistance of my guide Rodrigo, the rescue involved interpreting this cryptic email:

Huh? Even when you put that in the old standby, Google Translator, you get this:

Now, I’m getting better at Spanish, but this was like a chapter from the Da Vinci Code. Robert Langdon would be proud – Jacob and I hiked up to the bus terminal in La Paz to check if there was a bus company called “Trans Omar” and followed the trail of crumbs to an envelope with my name on it!

The next stop in this action-packed two weeks was Copacabana on the shores of Lake Titicaca. Retracing my steps again (not sure how that happens so often when the whole world beckons), I got to watch the bus barges in the light of day and spend a bit more time enjoying the tranquil shores of this giant fresh-water high altitude lake. Jacob and I took a boat out to Isla del Sol (Island of the Sun) for a day and night of exploring. Now, I don’t usually care THAT much about speed, but this boat was the slowest thing I’ve  traveled on, maybe ever. A raft might have been faster. The trip took around 2 or 3 hours, after a while you just lose count. Boats aside, Isla del Sol had an almost Mediterranean feel. There are no water mains to the island, so drinking water is brought in by boat and mule – makes a guy feel bad about taking showers. We met two guys on the island for the first day of hiking, then found a hostel to kick back and catch up on sleep after lots of tiring bus travel.

Back in La Paz, it was time for Jacob to fly home. We checked into the Adventure Brew, where the nightly price includes a free beer from the attached microbrewery, and reflected on the diverse experiences of the past two weeks. This post has been a rude summary, but take a look at the photos and trust me when I say that Bolivia is a magnificent country! The people here have hearts of gold. I leave tomorrow to climb Huayna Potosi, a 19,975 ft. peak – quite a bit for a non-mountaineer like me. Signing off, from base camp, hoping for a clear day at the summit!  -Luke